Only 13 refugees in Bulgaria receive social assistance from the state

In March 2017, it came out to be known that only 13 refugees in Bulgaria receive social money as a social help from the Bulgarian state, because of their disabilities. Apart from that, no other refugee in Bulgaria gets cash in some form of subsistence. The 65 Leva (33EUR)  a month were already taken away in 2015, two years ago.

END_OF_DOCUMENT_TOKEN_TO_BE_REPLACED

Recently, the State Agency for Refugee (SAR) and the Bulgarian Ministry of Interior (MoI) stated in a report that already thousands of people had left Bulgaria, this year. In January 2017, more than 2210 migrants had already left the country and in February 903 people were reported to be ‚disappeared‘. In March more than 400 people left Bulgaria. By the end of February, Bulgarian authorities stopped 1022 migrants at the Bulgarian-Serbian border. For 2016, the SAR granted a lot less the refugee status for asylum seekers than 2015. Nevertheless, the applications for asylum in 2016 were only 5% less than 2016. Until the end of January 2017, the SAR recorded 421 new asylum applications.

END_OF_DOCUMENT_TOKEN_TO_BE_REPLACED

Refugee family with a status has to leave Belene

Some days ago, a Syrian family, who already received a status, was welcomed by the Catholic church in Belene in the north of Bulgaria. But this was a problem for Krasimir Todorov, a municipal councilor, who organized some locals to protest against the family and the priest Paolo Cortesi, who helped the family.

Last year, the Syrian family came originally via Greece within the relocation sheme and was coordinated from the State Agency for Refugees in Bulgaria (SAR) to the Catholic community of Belene. Now the family has to leave again, because of the tensions in the city of Belene. Fr. Cortesi announced, the church is going to stop its charity-activity in the town. every [charity] activities of the church are on hold. If you need anything contact the mayor of Belene whose duties are to take care of the citizens in need.

END_OF_DOCUMENT_TOKEN_TO_BE_REPLACED

The mayor, Ivaylo Simeonov, of the Bulgarian town of Elin Pelin has told a Syrian family with a humanitarian status (for Bulgaria) to leave and is refusing to issue them ID documents. The Syrian family, who has arrived with their six years old sun in the country, stated that leaving the town is no option, because the same problems would occur somewhere else. The eldest son of the family, who already lived and worked three years in Bulgaria, had organized the accommodation in Elin Pelin. In the following days Bulgarian media echoed xenophobic, racist and anti-humanitarian statements from different persons, without opposing it.

END_OF_DOCUMENT_TOKEN_TO_BE_REPLACED

According to the State Agency for Refugees (SAR), 19,418 asylum applications were registered in Bulgaria (mainly by Afghan, Syrians and Iraqi nationals) last year. From all Afghan asylum seekers, 2,5% of them got a positive decision. Currently, the SAR suggests that 3,728 asylum seekers are accommodated in the open centers and the Migration Directorate of the Ministry of Interior stated that 984 are living in “closed-type“ centers. Now, two reception centers, managed by the SAR, are existing as closed centers: One part of the center in the outskirt of Harmanli, which opened after the riot in November 2016 and another one opened in the same center already in August.

END_OF_DOCUMENT_TOKEN_TO_BE_REPLACED

On the 6th of January, the Bulgarian Border Police made the case of two more dead people public, who were found by villagers near the village of Izvor in the region of Burgas near the Strandzha mountain massif. They had died of exposure to low temperatures. It was reported that the two Iraqi men were 28 and 35 years old. Only four days ago a Somali woman died in the same region.

Every year several migrants die in Bulgaria on their way to cross Bulgaria’s borderland – especially in the winter period. Actually nobody knows how many people died all in all in Bulgaria’s borderlands in the last years, because there is no statistics available. Often migrants who passed through the region report about corpses, which they had seen in the woods. The migrants try to cross in the mountain region where there is no fence blocking the way. Bordermonitoring Bulgaria (BMB) calls the Bulgarian authorities to rethink their politics towards refugees as a whole and asks them additionally to collect statistics about the various deaths which happen in the border region.

Yesterday, the Bulgarian border police found the corpse of a woman near the village of Ravadinovo in southeastern Bulgaria. A group of 31 migrants from Afghanistan, Pakistan and Somalia, which was detained one day before, said to the authorities they had to leave the woman, because she was too weak to go on. Two other members of the group, 14-and 16-years old teenagers, were brought to hospital because of frostbite.

This is the first human being who was killed by the European border system in Bulgaria, in 2017. Bordermonitoring Bulgaria (BMB) argues that the new installed European Border and Coast Guard Agency, which came into force on October the 6th 2016 at Bulgaria’s Kapitan Andreevo Border Checkpoint, cannot stop incidents like this. Therefore, it is tremendously important to create legal passages to prevent these kind of tragedies.

The following contribution is an English translation of a report, which was written by the human rights lawyer Valeria Ilareva, from the Foundation for Access to Rights (FAR) which was published in December 2016. The tranlsation was done by Daniel.

My day begins with a legal hearing at 9am. The case is of the more serious sort, but I’m eased by the thought that we’re at a judge. Meaning that among „the judges“ exist only a small number of actual judges – those trying to decide their cases objectively and without biases. Even in the event of a verdict to your client’s disadvantage, you nevertheless know that the hearing was carried out with humane attitude and the outcome of the lawsuit wasn’t predetermined. During the hearing the judge acts unusually irritated and reacts sharply on the preliminary submitted request for taking of evidence. She mentions that the most overburdened judges are facing disciplinary procedures for delaying lawsuits. I answer that I understand her and that I am doing everything within my possibilities not to slow down the case. I indeed understand her. At 11am the judges from the Sofia Regional Court hold a protest in front of the Supreme Judicial Council.

END_OF_DOCUMENT_TOKEN_TO_BE_REPLACED

Harmanli: The days after the riot

It was reported that after the riots, in the night, around 9 p.m. the police stormed into the three buildings, which are inhabited by asylum seekers predominantly from Afghanistan. They have beaten severely all men and teenage boys for two hours and broke doors, windows and other things. A 15 year old Afghani boy with a broken skull is in a very critical condition and a medically induced coma. He was already part of an escort accompanied by policemen, who tried to send him to the closed camp in Elhovo. After it was recognized, that he has serious problems, the teenager was first treated in a hospital in Yambol and afterwards transported to the the hospital in Stara Zagora. There an emergency operation was carried out.

Since two days, the health checks in Harmanli have started. The Bulgarian authorities have announced openly that new fences will be constructed around the camp. It was also announced that the former Transitcenter in Pastrogor will turn into a closed camp. Afghan habitants of the camps are blamed by the authorities that they have started the riot and bigger parts of the Bulgarian media propagated this.

It was stated by the State Agency for Refugees (SAR), that Afghans will be deported back to Afghanistan. For now, they are offered voluntary deportation, even if their cases are not decided, yet. 40 people already signed such a paper. If they do not want to, they are threatened to get imprisoned after they had to go in front of the court. After the first trials against the 18 people who were are arrested in Harmanli for rioting everybody of them (three of them underaged) will remain in custody.

Meanwhile there were statements made by the Bulgarian Helsinki Committee (BHC) and the UNHCR: The UNHCR spokesman urged, that asylum seekers should not be deported on national security grounds or because of a protest. The BHC has called for an investigation of the events in the camp. Bordermonitoring Bulgaria (BMB) is sharing these two opinions. All closed centers and open centers are still overcrowded. As long as the conditions in the country are as bad as in Harmanli and elsewhere, Bulgaria will remain a Transit Country for migrants.

Today, after more than two days of quarantine, at noon a massive riot broke out in Harmanli’s refugee camp, which is located not far way from the Bulgarian-Turkish border. The revolting migrants protested against the closing of the camp and for freedom of movement. Hundreds did not understand why more than 3000 people have to stay inside the camp and are not allowed to go out, while not everybody is ill from deceases. The closing of the camp was already a longer plan of the authorities and an answer on the permanent ongoing protest of right wing parties, neo-nazis and their supporters.

Some small barricades were built up by the protesters, some of them were burning. After a while, a water cannon which had entered the camp, was attacked by several people with stones. Riot police answered to them with batons and some of them were even throwing stones back to the revolting migrants. After a longer while the situation calmed down, as some migrants managed to pacify the crowd. The people continued with their protest peacefully.

After failed negotiations, the riot continued again in the night. It was stated, by Bulgaria’s Interior Ministry chief secretary Georgi Kostov, that more than 200 people from the camp are in custody. Police had entered some buildings and started to use physical violence. Even people who were not part of the riot were attacked. It was reported that the police used rubber bullets and water cannons. At the moment it is still not clear how many people are injured, regarding the lack of communication inside the camp. Already many people claimed that the police had entered their rooms and beaten them, although they did not participate in the riot. Several photos are already available, which are documenting their injuries. 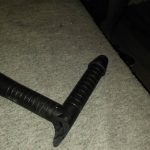 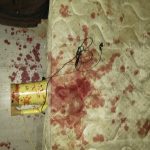 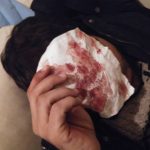 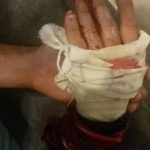 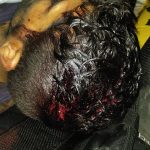 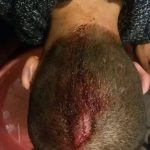 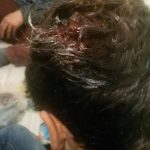 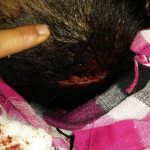 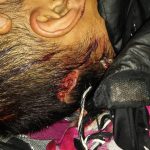 Update: More and more photos appeared, showing injured migrants. Other sources reported on 400 people, who were taken already in custody by the police and 60 army forces, which will be deployed inside the camp.