Traces of migration flow at the Bulgarian-Turkish border

Since weeks the migration flow at the Turkish-Bulgarian border is increasing again. The UNHCR came out with a report in August 2017 which added together the numbers of interceptions at the Turkish-Greek and the Turkish-Bulgarian land borders from January-August 2017 and mentioned a quantity of 17,067 people. Only in August 2017 a number of 464 was intercepted at the Bulgarian-Turkish border by Turkish land forces. In September and October 2017 Turkish authorities reported about several attempts of crossing the Bulgarian border, which were reported broadly in the Turkish media. As opposed to this a number of 586 intercepted people was mentioned in the last report of the Bulgarian Ministry of Interior for September 2017.

Hole under the fence 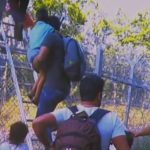