Voenna Rampa: Living on the margins of society

The recent statement of the Bulgarian Prime Minister Boyko Borissov, reported by the Focus News Agency that the situation in the Bulgarian refugee camps is perfect, can still not be confirmed. Today, poor living conditions are an ongoing issue in virtually all refugee camps, operated by the State Agency for Refugees (SAR), throughout the country. Literally many of the people living on the margins of Bulgaria’s society.

One example is the camp Voenna Rampa, located in the north of Sofia, a former abandoned school in a complex of former military barracks in an industrial area, which is hosting more than 400 asylum seekers, where is normally place for about 800 people. It seems, that at the moment, the influx of people fleeing through Bulgaria is increasing once again. Only in the last 1 1/2 weeks, 300 additional inhabitants were accommodated in the building.

Since the last two years a lot changed in the camp, especially in the maintenance of the buildings. During the last years, the building was renovated and thermal isolation as well as heating and windows were installed. In the yard a playground for children was built. The complex has now more toilet rooms than previously, but right now the showers can not be used, because they are out of work. People need to take a shower with a bucket. Especially in the corners of the toilets there is a lot of mildew and water damages. The toilets are on each floor directly next to the sleeping rooms, so people are exposed to these defects. 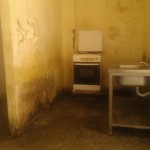 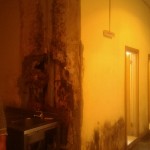 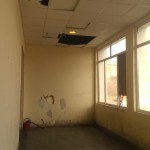 Holes in the wall and ceiling

The asylum seekers get food three times a day (at 10h, 12h and 16h). There are no kitchens accessible, only some stoves, but they are very old and often do not work. Next to the food bank is a really big room, where people are not allowed to sit and to eat, which is completely nonsense, because they need to eat in their rooms or in the yard. There is still no money from the state for the asylum seekers in the camps and no possibility to buy additional things. An inhabitant of the camp mentions:

We don’t have any money, we cannot buy ourselves a coffee or disposable nappies for babies.

Many inhabitants in the camp are children, mostly in a very young age (under 6 years), but some teenagers without parents or only with parts of their family live there as well. Families and single men live separated on different floors. Some rooms are even empty, nevertheless people are sharing the rooms. The rooms have different sizes, some are with 4–5 beds others with more than 10. Few families have their own room at the moment, which was not possible, when the camp was totally overcrowded. Now, the gym where formerly hundreds of people were housed, could be used by the inhabitants of the camp, at the moment. 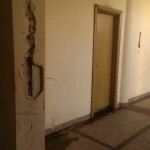 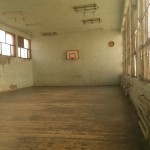 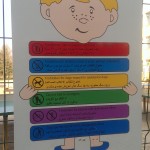