Ovcha-Kupel: A place of broken dreams

When Serbia recently started to deport refugees to Bulgaria, some of them stranded in the Reception Center for Asylum Seekers in Sofia/Ovcha Kupel. Jamal Anjuman*, who recently made it through the border to Serbia, but was deported by Serbian border police to the Bulgarian border, stated:

In Serbia we were arrested. We were handcuffed and they brought us back to Bulgaria. We don’t now why. Now we are here and don’t know what to do.

The Reception Center is located in a district, where many industrialized buildings are included. One could find a lot of neo-nazi graffiti and swastikas on the walls of many houses, many of them are already present in the neighborhood since years. Nearly every day, the police is present in front of the center for asylum-seekers and the migrants are getting permanently controlled by them. 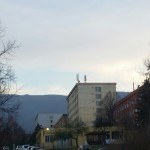 Photos of the neighborhood 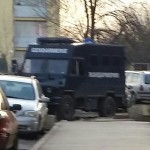 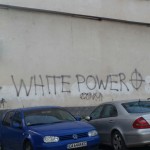 Since 2014, there is no integration plan present in Bulgaria’s asylum system, although the European Asylum Office (EASO) is counseling the State Agency for Refugees (SAR) and the Bulgarian government, since 2013. Other people, who are living in the Reception Center for a longer time period, mentioned that they still don’t get the social money of 65 Leva anymore, which were already cut in 2015. In front of us, this was stressed among others by Nuri Rahmani:

We don’t get any help from the state, they don’t give us social money and we have to pay for most of the medical stuff, we need. 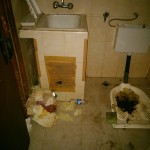 Inside the Reception Center 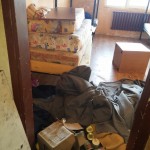 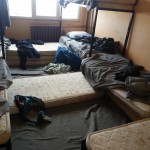 Two times a day the migrants get food organized by the SAR, which is responsible for the facility, while there is no chance for older people or children to get special or diet food. In 2015, the SAR was even in need of food for their reception centers in Sofia and Harmanli. The former head of the SAR, Nikola Kazakov was expelled some days ago, because “irregularities” in spending money on food for the refugee centers.

Many migrants see no future in Bulgaria and try to leave the country, 11,012 of them were caught at the bulgarian-serbian border in 2015, when they attempted to leave Bulgaria in the direction of Western Europe. Ironically, the Bulgaria’s prime minister, Bojko Borisov, stated recently that the situation in the refugee camps “is perfect“.

*All names are changed by BMB