Silent crossing through Bulgaria ends up in registration process in Serbia

Most of the refugees, crossing via Bulgaria, arrive in Dimitrovgrad, a little town, that is 4 km from the Serbian-Bulgarian Border and 60m away from Sofia, the capital of Bulgaria. They have to register at a camp, that is managed by the Serbian border police. Registered people have to leave the country within three days. Some are walking days before they finally arrive the police station. Taxi Drivers are waiting in front and offer a ride to Belgrade for 200 Euro. Usually they buy a bus ticket to Belgrade for 25 Euro, money that is sometimes provided by volunteers. The volunteers camp is located in the same area as the police station with the tent of the red cross and the presence of the UNHCR. At the end of the working day, the representation of the UNHCR and the Red Cross closed before 4 pm. 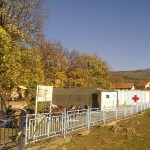 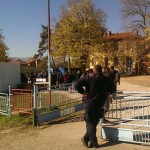 Entrance of the camp 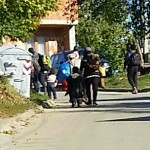 Street in front of the camp

Roughly 300 people, later trying to move on for seeking shelter in other European countries, are arriving in Dimitrovgrad day by day. Most of them are young men, nevertheless, from time to time, there are families that arrive with them. Two unaccompanied minors, Jamal and Sami*, explained what they witnessed in the region at the Turkish-Bulgarian border: “We saw two dead bodies laying on the ground. They did not look well anymore. After the police caught us, they were cutting our backpacks.“

Aziz, the father of a young family told us the situation at a detention center, next to Sofia: “I saw 3 families in Busmantsi. They are there since weeks. Some people are staying 2 days, some even month. I don’t know, what is the Bulgarian system.“ He later told us about his friend, being controled by police, that was supposed to “pay 20 Leva (10 Euro) for nothing“.

Some people manage to pass through Bulgaria without any registration and even some people who are being caught by authorities manage to escape. Nuri, another young Afghan man spoke about what happened to him when he was arrested at the border: “When I said to the (Bulgarian Border)police, that I wanted to go on to Germany, they hit me on my mouth.“ After the custody, when he was brought to the open camp in Ovcha Kupel, he escaped: “Before they took my fingerprints I left the (open) camp.“

The situation for refugees in Bulgaria is continuously criticized by several NGOs. The Bulgarian Helsinki Committee stated recently, that the “duration of the asylum procedure has increased on average from 3 to 6 months and is still growing“ in Bulgaria, as well as interpretation service could not be provided. Not everybody, who is trying to escape the situation in Bulgaria, can cross the border. The recently published report, of the BHC in cooperation with ECRE, shows that 2,199 people where caught at the border when they wanted to leave the country, only in the first half of 2015.

Update: At the 9th of November, a hunter found the body of a dead migrant at Varshilo. Since the 16th of November, the volunteers camp is closed. Volunteers are now helping outside of the police station. At the 7th of December, Human Rights Watch came out with a report on bribes that are being asked by the Serbian police to speed up the registration process.