At the moment, camps in Bulgaria are overcrowded, people are sleeping in corridors or even in the streets, because there is no place for them. According to the Bulgarian Red Cross, 1500 refugees are in urgent need of humanitarian aid, and a further 500 are in vulnerable condition. More than 2000 refugees were detained, only in the month of September 2013.

In Banya the authorities tried to create new space for families. But the whole problem is the lack of space, different families have to share the same room and their children don’t have any possibility to go to school – this is a well known problem, not only in Banya. The camp has already topped it’s capacity twice. 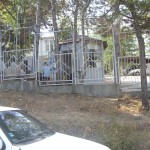 Entrance of camp in Banja 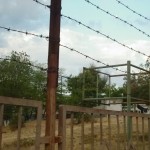 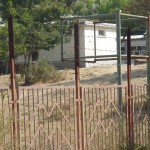 In Pastrogor, the  so called „Transit Center“ was planned for 300 people. Currently 500 people, under them 150 kids, live there – after they were released out of the Detention Center in Lyubimetz. 90% of the people, that are living in the camp outside the the little village of Pastrogor are coming from Syria. The refugees launched a protest there, to receive a status more quickly.

In Sofia (Ovcha Kupel), there are over 1000 refugees now. The camp was extended this year, but it is overcrowded and people have to sleep at the staircase. Others are getting homeless, because they have to leave in a short time, if they got a status. The are seeking shelter in an unfinished building which ruin is towards the camp. 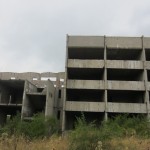 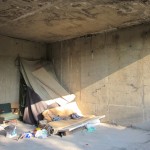 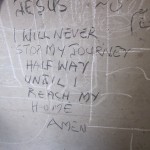 There were also protests about the conditions in the new camp in Vrajdebna. Until now, 500 refugees live there. They said, that the situation there is not bearable. The Bulgarian Helsinki Committee (BHC) described the shelter as an „abandoned for years, crumbling building, without heating, with broken windows, mold, lack of hot water or no water at all, an entire floor without electricity, non-functioning sewage, beds in the form of just mattress with one blanket for three people, complete lack of personnel, medical care, medications and even food.“

The BHC demanded in a letter the collective resignation of the State agency for refugees (SAR). Bulgarian politics are counting on the assistance from the European Asylum Office and FRONTEX. Under the refugees are also a mentionable quantity of unaccompanied children. A further plan of the Bulgarian government is to accommodate the refugees in old military buildings.